On reading: The Girls by Emma Cline 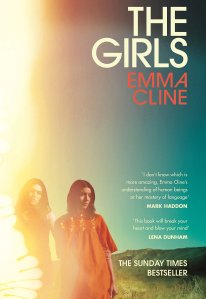 From the back: Evie Boyd is fourteen and desperate to be noticed.

It’s the summer of 1969 and restless, empty days stretch ahead of her. Until she sees them. The girls. Hair long and uncombed, jewelry catching the sun. And at their centre, Suzanne, black-haired and beautiful.

If not for Suzanne, she might not have gone. But, intoxicated by her and the life she promises, Evie follows the girls back to the decaying ranch where they live.

Was there a warning? A sign of what was coming? Or did Evie know already that there was no way back?

The gist: This was a book that I’d seen in lists such as ‘best summer reads’, ‘best true crime novels’ and ‘best novels about being a girl’. So, why not try it, right? I’m a girl, it’s summer, and I’m a sucker for some crime based wordery. So I picked the book up, and beyond seeing that it was loosely based on the Manson murders I avoided reading too much about it so as not to spoil the ride.

And before reading this book, I wasn’t sure what people meant when they talked about ‘summer reads’. It always felt like they were referring to books in a disposable way – an ‘easy read’ type of thing. But to me this is a true summer read. It literally bleeds summer. (Yes, I know, I literally shouldn’t use literally like that, but I just did and will literally try to live with that going forwards). The book sweats sea and sand and the smell of salty hair. It leaches long, warm sunsets and hazy afternoons spent indulging in your drug of choice. And it draws out the awkwardness of youth, the experiences that frame your adult life, the experiences that change you, those that you remember in the strangely specific internal photographic memory of your early life.

And I enjoyed it for what it was. If anything, I’d rather it not have been so closely tied to the Manson murders. It didn’t need to be, and it meant that as a reader I was always looking for that link. But as a character study into a woman who experienced some crazy shit as a young girl, and still hasn’t really gotten to grips with what that meant to her and how she felt about it, this was touching.

So, read it on the beach, or kicking your heels in sand dunes. And don’t expect action, but do expect to get involved in a character’s very personal reverie.

Read if: You are somewhere hot, drinking in the afternoon, and you’ve reached the point of merriment where you start angst-ing over your younger self.

Read with: A dusty glass of unspecified punch from the poolside bar that’s not been updated since the 1970s.

Get it:  The Girls by Emma Cline